Share
Twitter
Facebook
Linkedin
Mail
Copy link
Babak Pahlavan
Senior Director of Product Management, Analytics Solutions and Measurement
Share
Twitter
Facebook
Linkedin
Mail
Copy link
For an ad to have impact, being seen isn’t just important, it’s fundamental. That’s why measuring the viewability of advertising matters so much. Today, we’re releasing new research to help the industry better understand video ad viewability rates around the world and across devices, and announcing updates to our Active View measurement technology that helps advertisers place their ads where they have a better chance to be seen.

Read the full “State of Video Ad Viewability” report to see viewability rates across different inventory types and devices around the world.

To ensure all of your video ads are being seen and heard, not just those on YouTube, we’re launching two new Active View bid optimization strategies in DoubleClick Bid Manager for video ads on the rest of the web and apps, where video ad viewability is lower. This includes the ability to optimize towards a video ad that is viewable on screen for at least 10 seconds, or towards a video ad that completes in view and is audible.

Active View optimization uses machine learning to maximize the impressions that meet your viewability and audibility goals. Specifically, this means that Active View factors in signals like video player size, domain and position on page to determine the optimal bid for each impression, so you get the most from your marketing budget. These new bidding strategies allow you to improve view-through rate for situations when you need to know that your audience is paying attention — if, for example, you need more time to explain your offering, or if your branding or logo doesn’t show up until the end of the video.

Advanced Active View metrics for all of your video ads

Earlier this year we announced enhanced reporting for YouTube TrueView campaigns in DoubleClick. Now, we're expanding on that announcement and making new Active View metrics available in DoubleClick Campaign Manager and DoubleClick Bid Manager for all of your video ads, not just YouTube.

These new viewability and audibility metrics allow you to uncover deep insights into creative performance and user attention, including: 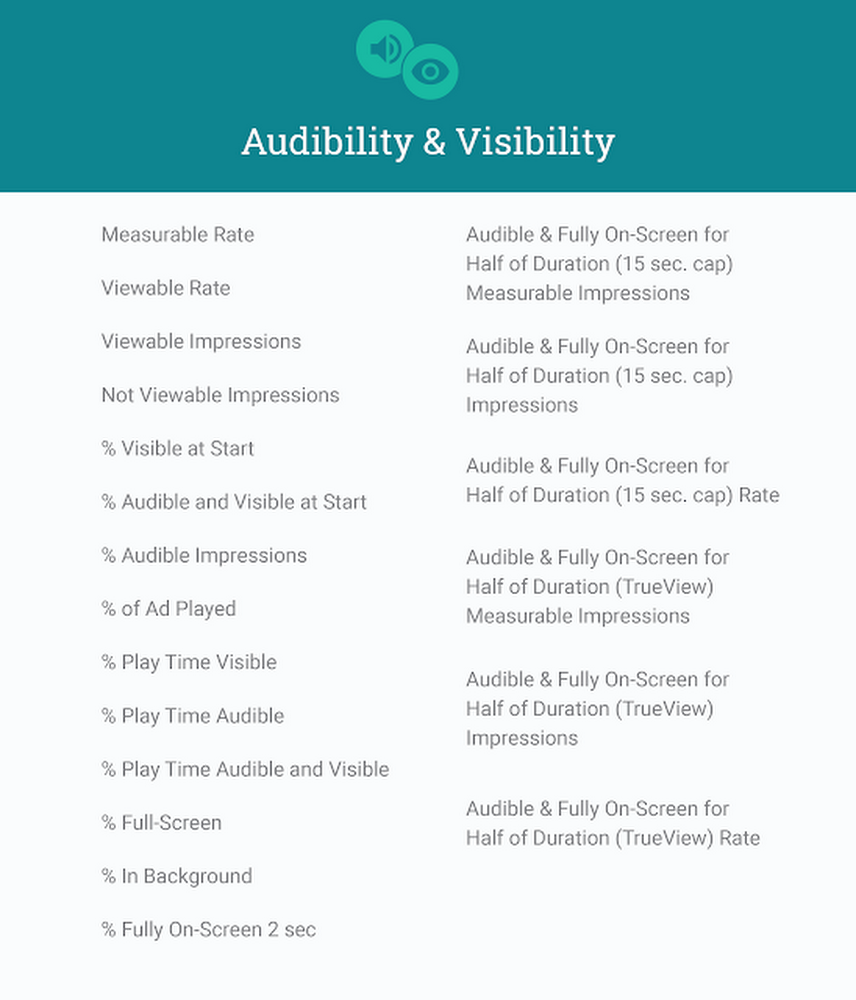 With new viewability and audibility metrics in DoubleClick, you can get closer to understanding which of your video ads are holding the attention of your viewers, and are thus most likely to make an impact, and which you need to improve in order to deliver more impact.

And, because DoubleClick Campaign Manager is MRC-accredited for viewable video ad impressions for desktop web, mobile web and mobile app, when you view these metrics in Campaign Manager you can feel confident that they’ve undergone a stringent, independent audit. We are also in the process of seeking MRC accreditation for video impressions and viewability statistics in both AdWords and DoubleClick Bid Manager.

Today’s announcements are the next evolution of Active View and reflect our commitment to empowering you with the data and tools you need to ensure your ads are capturing attention. Visit the Help Center to see all available metrics in Campaign Manager and Bid Manager reports.