In 10 years, Google Translate has gone from supporting just a few languages to 103, connecting strangers, reaching across language barriers and even helping people find love. At the start, we pioneered large-scale statistical machine translation, which uses statistical models to translate text. Today, we’re introducing the next step in making Google Translate even better: Neural Machine Translation.

Neural Machine Translation has been generating exciting research results for a few years and in September, our researchers announced Google's version of this technique. At a high level, the Neural system translates whole sentences at a time, rather than just piece by piece. It uses this broader context to help it figure out the most relevant translation, which it then rearranges and adjusts to be more like a human speaking with proper grammar. Since it’s easier to understand each sentence, translated paragraphs and articles are a lot smoother and easier to read. And this is all possible because of end-to-end learning system built on Neural Machine Translation, which basically means that the system learns over time to create better, more natural translations.

Today we’re putting Neural Machine Translation into action with a total of eight language pairs to and from English and French, German, Spanish, Portuguese, Chinese, Japanese, Korean and Turkish. These represent the native languages of around one-third of the world's population, covering more than 35% of all Google Translate queries! 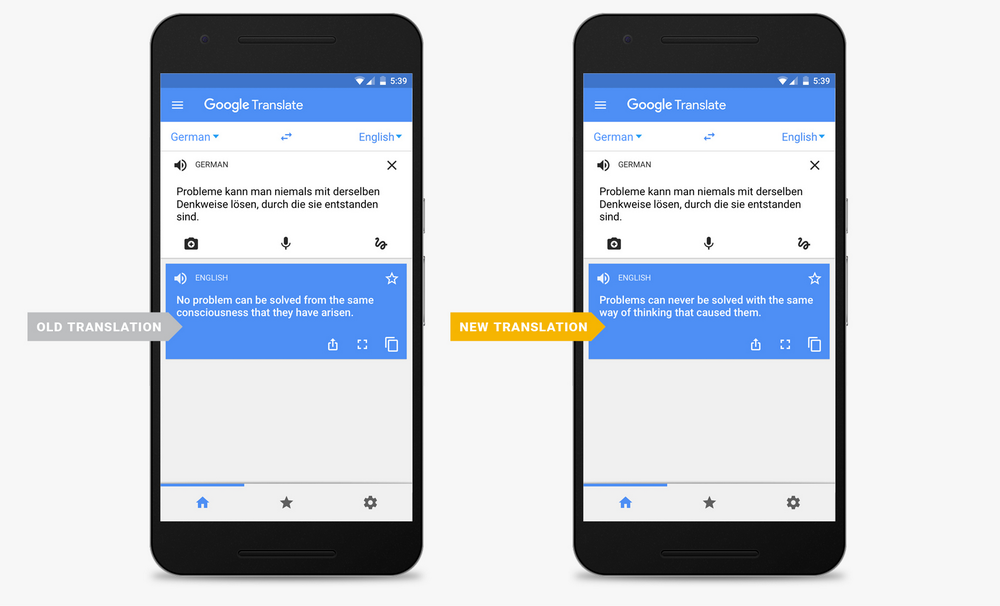 With this update, Google Translate is improving more in a single leap than we’ve seen in the last ten years combined. But this is just the beginning. While we’re starting with eight language pairs within Google Search  the Google Translate app, and website; our goal is to eventually roll Neural Machine Translation out to all 103 languages and surfaces where you can access Google Translate.

Today’s step towards Neural Machine Translation is a significant milestone for Google Translate, but there’s always more work to do and we’ll continue to learn over time. We’ll also continue to rely on  Translate Community, where language loving multilingual speakers can help share their language by contributing and reviewing translations. We can’t wait for you to start translating and understanding the world just a little bit better.