We are now providing you with more real-time information throughout Google Analytics for Firebase to give you a better read on what’s happening in your app.

Inside the Google Analytics for Firebase Dashboard, you’ll now find a real-time card, much like the one on the Google Analytics Home. It shows details on the number of active users in the past 30 minutes. You'll also see the top conversion events logged by the app. You can configure these conversions so you can track app events that are most important to your team. 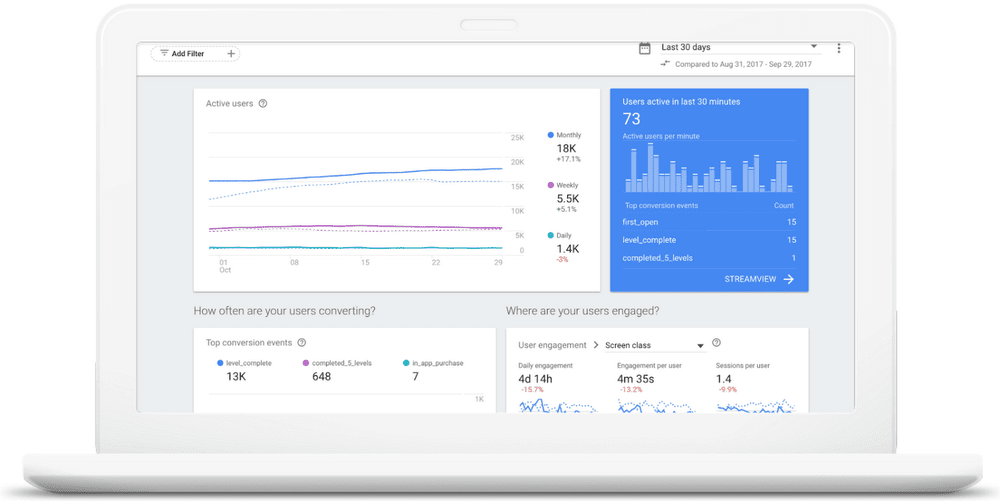 Google Analytics for Firebase has a brand new stability card that reports on data from Firebase Crash Reporting and Firebase Crashlytics. It displays the percentage of users who have not had their app crash, so you can see just how stable your app is.

The new Latest Release report lets app developers track the adoption and stability of new app versions within a few hours of release.

The report also contains a real-time card with an app version filter that lets you see which users have adopted the latest version of a release and know whether any versions have crashed in the past 30 minutes. It also lets you measure your users’ level of engagement.

The updated experience is more consistent with Google Analytics, but one thing hasn't changed: Google Analytics for Firebase users still get the same great app-centric reporting and analysis they're used to for Android and iOS. Our engineers are working on developments and new features we'll share in the months to come.

To see the new look and updated features, check out your Firebase project now. (Don't have one yet? Sign up!)