Which TV Ads Made the Podium During the 2016 Olympics Opening Ceremonies?

When the 2016 Olympics kicked off last Friday, many TV advertisers were crossing their fingers that their strategy would pay off. Reaching an estimated 26.5 million total viewers in the U.S., they were hoping their ads delivered relevant and compelling creative to the right audiences. To answer the pay-off question, advertisers will predominately look at three specific areas of performance:

To get some insights into these questions, Google evaluated the top 10 brands (based on total ad minutes) that aired ads during the live broadcast of the opening ceremonies. The analysis is based on a combination of consumer surveys and second-screen (mobile, desktop, and tablet) response data. Presented in a live Google Data Studio dashboard, the result is a unique view into the full-funnel performance of the ads evaluated.

Commercials during large, live sporting events like the Olympics are often uniquely created to leverage both the scale of the audience and the context of the event. Whether it is telling the personal story of an athlete or playing to our passions like patriotism, they are intended to strike an emotional connection, entertain us, or make us stand up and take notice.

Coca Cola was the big winner with almost 35% of respondents having remembered seeing the ad when prompted—a result that outpaces typical recall rates in the 20%-25% range. Not a surprising result from a top CPG brand. Samsung, Chevy, United, and Visa rounded out the top five with respectable recall rates. 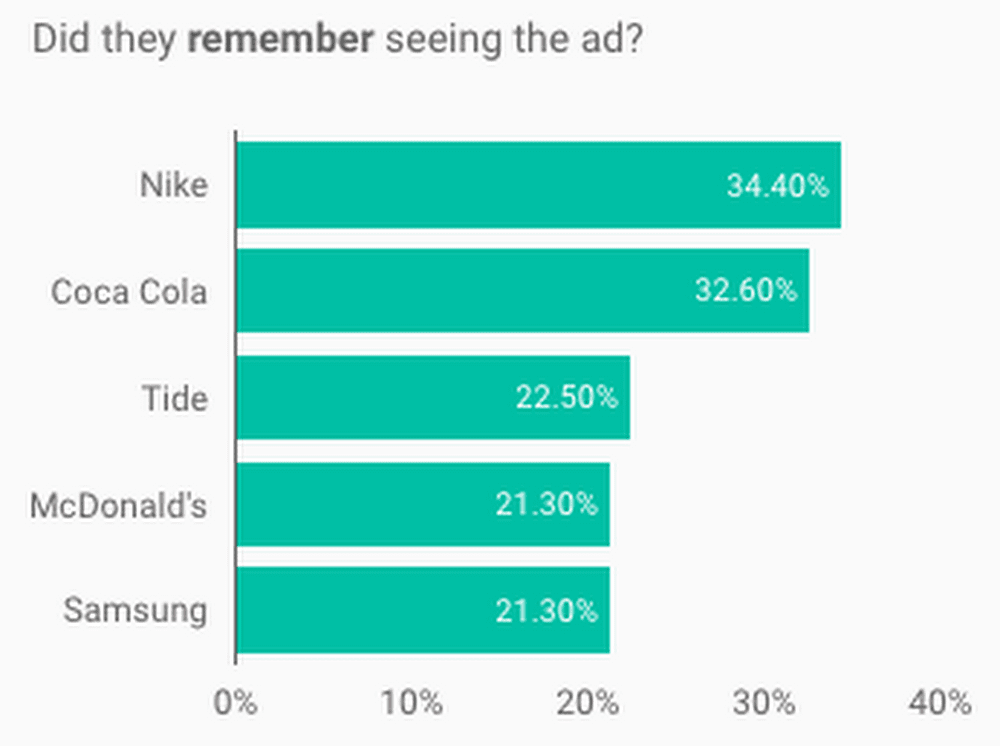 Additionally, of those respondents recalling the ad, only 40% could recall the specific product or service featured in the ad. The net is that only about 8% of viewers can recall both the brand and product in a specific advertisement. For many of the ads this was the first airing and it is reasonable to expect these numbers to improve substantially with increased exposure over the next couple of weeks.

Advertisers also want the ad to shift perceptions and create interest in the product or service featured. By surveying both viewers who saw the ad (exposed) and those who did not (unexposed), we are able to get insights into the impact of each ad’s messaging and creative. Overall, the results were impressive. On average, respondents who saw the ads were 18% more positive about the associated brands than those who did not. Likewise, respondents who saw the ads were 16% more likely to find out more and/or purchase the product being advertised.

Consumers who saw the ads were 18% more positive about the brand and were 16% more likely to find out more or purchase the product in the ad.

Interestingly, the baseline favorability and purchase intentions for both non-sponsors and Olympic sponsors are relatively equal. And for the most part, the ad’s impact on both factors was the same across non-sponsors and sponsors.

These commercials don’t just make us laugh or make us feel better about the brand—they also make us search and visit websites. Second-screen searching—whether it’s to re-engage with the ad or to learn more about the product—is a powerful indication of desire. By measuring incremental search queries on Google and YouTube during the broadcast that are specific and modeled to be attributable to ads shown, we are now able to include responses in our analysis. During the opening ceremonies, TV ad driven searches were almost exclusively on mobile—94% compared to an average of 56% for those brands when the ads were not airing. For brands, that means a presence on the TV screen isn’t complete without a strategy for small screens, as well.

"94% of searches on Google and YouTube as a result of seeing the ads occurred on mobile devices." 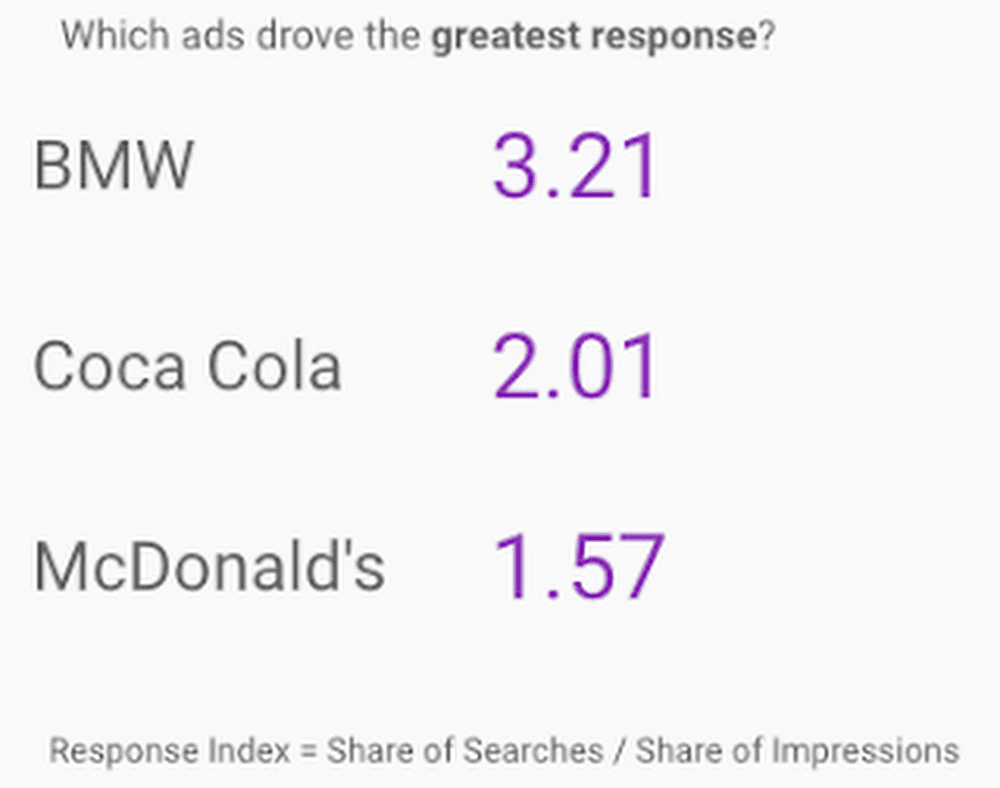 Compared to the average of the top 10 ads studied, McDonald’s drove 42% more searches.

Finally, the Samsung Galaxy Note 7 ad was the overall winner with strong full-funnel performance placing in the top three across all three funnel stages. Whether people are tuning into the Olympics or their favorite TV show, they use their smartphones to search for information triggered by what they’re seeing. That means if you advertise on TV, you can now get a new view of performance across each stage of the funnel—using a combination of consumer surveys and digital response, all in a matter of days. Armed with these new insights, advertisers are now able to better understand and improve the performance of these investments in concert with their digital media.

Using Google Surveys 360 to provide consumer ad awareness and interest research, an online survey was conducted in the United States during the period 8/6 - 8/9/16 using a validated, representative sample with a minimum of 750 respondents. Response data is based on incremental TV ad-driven search queries (Google and YouTube) during the course of the broadcast that are specific to the ad shown and are modeled by Google Attribution 360 to be attributable to the airings of the commercials. Response data is normalized for total commercial air time during the broadcast for each advertiser and indexed to the average.