This is the third post in a series about Display & Video 360 innovations.

Display & Video 360 is organized around five integrated modules that work together to simplify the end-to-end campaign process: Campaigns, Audiences, Creatives, Inventory and Insights. Today you’ll learn more about new features of the Audiences module, the destination to consolidate, build and understand your audiences for advertising, so you can better connect with the consumers you want to reach.

Consolidate your audiences in Display & Video 360

The Audiences module is where you can get a single view of your audiences, including Google-powered audiences and the ones you provide. Your media and analytics teams can use the Audiences module to learn more about the users you want to reach, then create new audience segments to help you reach them with relevant campaigns. You can also choose to make the segments you create available across different accounts belonging to your company thanks to the ability to link accounts.

When it comes to helping advertisers reach specific audiences, we believe that user privacy and control come first. This is why we have strict policies in place to protect users.

Build your audiences the way you want

The Audiences module gives you the flexibility to create the most relevant segments for your campaigns. For example, let’s say that you’re an automotive brand planning a campaign for the launch of a new electric car. You know that a great starting point is to reach consumers who have already shown interest in your brand. This means being able to create a new audience that includes anonymous segments of consumers who interacted with an ad from a prior campaign. The activity audience builder feature lets you build audiences from a number of prior-campaign metrics, including aggregated conversions or clicks.

Finding the right audience involves more than just looking at those who have responded to prior advertising campaigns. For example, the auto brand might also be interested in reaching people who used the car configurator on their website or app. This audience can be easily created in Analytics 360 and then shared with Display & Video 360 in just a few clicks.

The Audiences module also lets you combine multiple audiences to see the overlap. For example, the auto brand could see the overlap of segments of consumers who clicked on an ad and used the car configurator, allowing them to create a list of consumers who responded to their ads and demonstrated a higher interest in the brand through actions on their site. This ability to combine audiences from Analytics 360 or Display & Video 360 is one of the key advantages of using Google Marketing Platform, and it will help you reach the right consumers more efficiently. 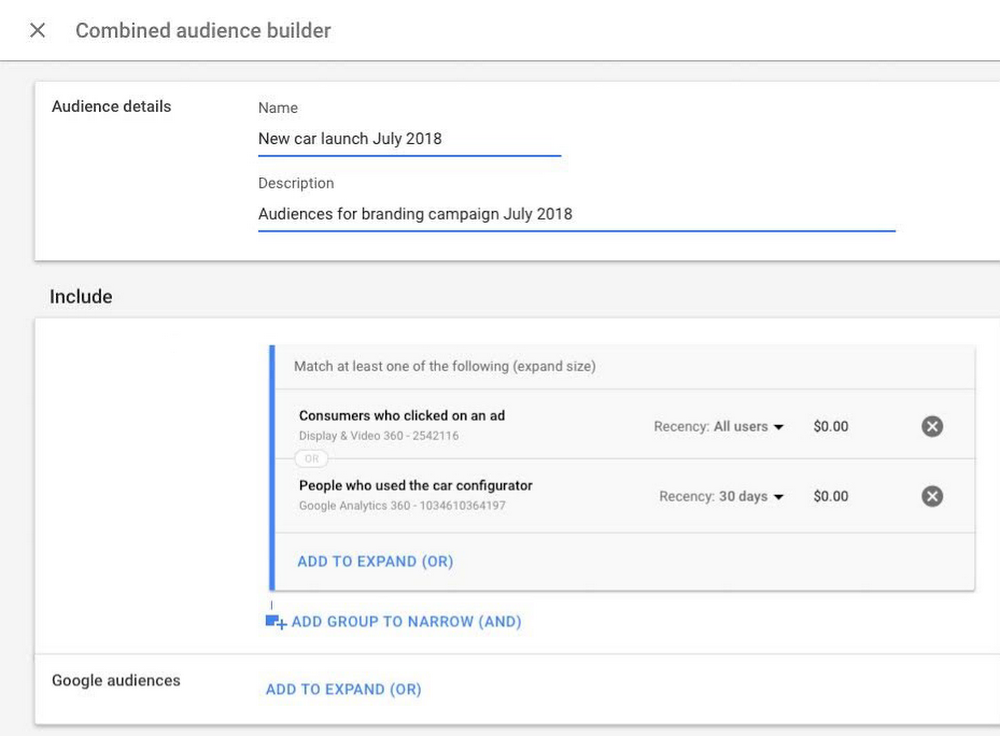 Your existing customers are a good starting point for determining who to reach with your campaigns, but one reason why you’re advertising is to find new customers. Display & Video 360 makes it easy to discover insights you can use to reach the consumers who are most likely to buy your products. One way is to understand which new audiences are the most similar to audiences you already care about.

For example, you might discover that the group of people that responded best to a previous campaign share similar interests, like a passion for camping, or share similar demographics. These are valuable insights that you can use to both create more relevant messages and reach additional consumers with these same interests.

You can also use the same audience segments to set a frequency cap that works across multiple campaigns. If you are running two campaigns at the same time and set a frequency cap of 5, we won’t serve more than 5 ads to consumers across both campaigns, even if there is an overlap in the audience segments. As a result you’ll reach more consumers who will be happy to see fewer, more relevant ads.

The audience frequency cap will work across your video and display campaigns, including Programmatic Guaranteed deals (currently available in beta) and open auction buys. If you use multiple Display & Video 360 accounts, frequency caps set at the audience level will work for all your campaigns across the accounts that you have linked.

Knowing your audiences has always led to better campaign performance, because you can connect with them in a useful and timely way. The Audiences module allows you and your teams to find meaningful insights at scale and immediately activate them in your campaigns. We’re continuing to invest in advancing the audience capabilities of Display & Video 360 so you can expect more features in the future to help you reach your goals.

Bring your marketing teams closer together with Display & Video 360

Missed the other posts in this series? Catch up now and read about new innovations for each of the Display & Video 360 modules:

And, download our guide on the benefits of end-to-end campaign management.