As the Chrome dino runs, we caught up with the Googlers who built it

We’ve all been there: you’re trying to load a news article, urgent email, or video when you suddenly lose internet access, either from slow network performance or spotty Wi-Fi. A few years back, the Chrome team realized that downtime doesn’t have to be a downer. "There's nothing fun about getting kicked offline—unless you have a friendly T-Rex to keep you company, that is," explains Chrome UX engineer Edward Jung on the motivation behind Chrome’s offline Dino game. The hidden game shows itself on the new tab page when Chrome users find themselves offline—press the spacebar, and the dino turns into a runner game.

The running T-Rex made its debut on Chrome four years ago. On the occasion of Chrome’s 10th birthday this week, we sat down with its creators from the Chrome Design team—Edward, as well as Sebastien Gabriel and Alan Bettes—to learn more about the dinosaur’s journey from the Cretaceous period to the modern browser.

How did you come up with the idea of running T-Rex?

Sebastien: The idea of “an endless runner” as an easter egg within the “you-are-offline” page was born in early 2014. It’s a play on going back to the “prehistoric age” when you had no Wi‑Fi. The cacti and desert setting were part of the first iteration of the “you-are-offline” page, while the visual style is a nod to our tradition of pixel-art style in Chrome’s error illustrations. 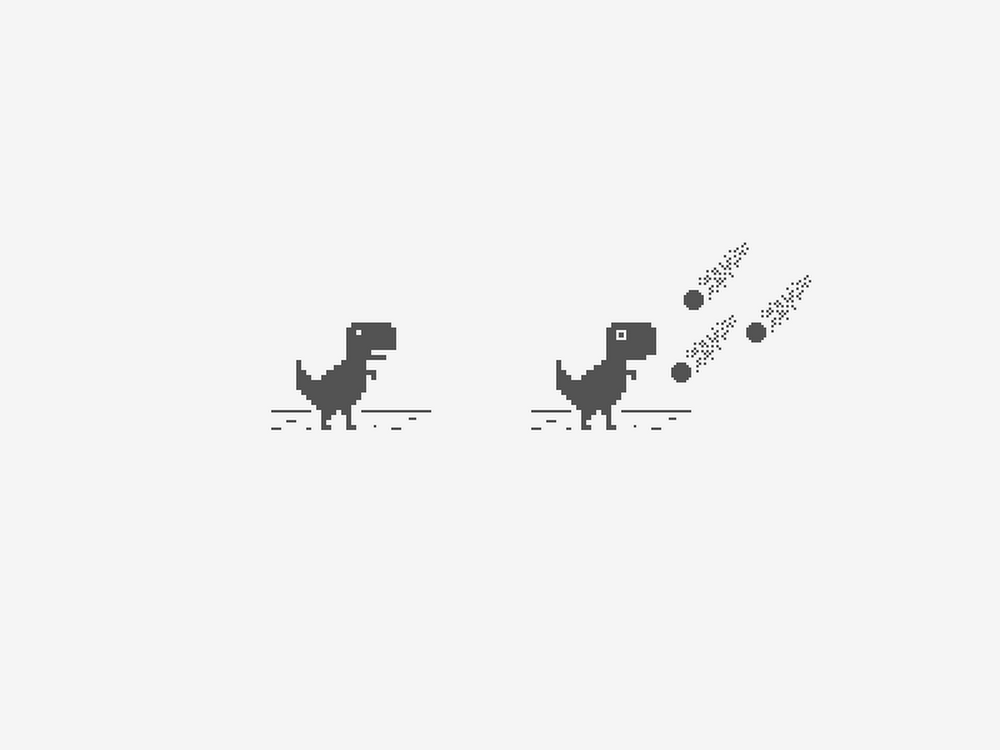 First design iterations of the dino character, code name Project Bolan (if you get that reference, we’ll strike a gong in your honor).

Alan: The only restriction we placed on ourselves was to keep the motion rigid, reminiscent of vintage video games. At the beginning we thought, “What if it did a cute little kick in the beginning like our favorite 90’s hedgehog? What if it roared to signal to people that it was alive?” But in the end, we settled on the basics of any good runner game: run, duck and jump.

One of the original ideas: Roaring dino

The new easter egg was submitted in September 2014, under the guise of a page redesign. How did the launch go?

Edward: It was the first time I'd written a game, so I had a lot to figure out—jump physics, collision detection, and cross-platform compatibility. The first iteration played terribly on older Android devices, so I ended up having to rewrite the whole thing. But by December 2014, the game had scaled to all platforms.

We can imagine that the Chrome Dino got quite popular.

Edward: Yes! There are currently 270 million games played every month, both on laptop and mobile. Not surprisingly, most users come from markets with unreliable or expensive mobile data, like India, Brazil, Mexico, or Indonesia.

It also got to the point where we had to give enterprise admins a way to disable the game because school kids—and even adults who were supposed to be working—really got into it.

Sebastien: We also created the chrome://dino URL, where folks can play the game without going offline. The page offers an “arcade mode” so players can train for the best results in a full-window experience. 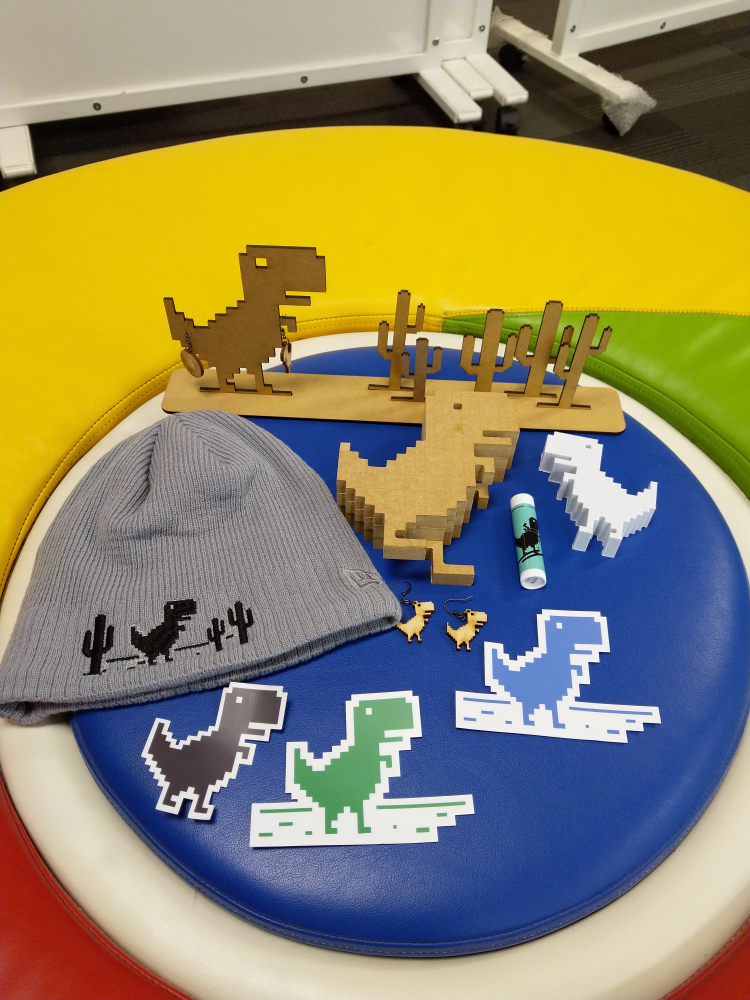 The dino has become the Chrome team's internal mascot. This is just a fraction of the Dino swag you might spot on Google's campus.

You currently have a special edition of the game out. Can you tell us more about that?

Alan: Over the years, the game got a few upgrades, like pterodactyls and night mode. The latest one rolled out this week: a special “anniversary edition” for Chrome’s 10th birthday. Look out for cake, balloons, and a fancy birthday hat.

What flavor is the cake?

Alan: Edward is actually an amateur baker, so he decided on a classic vanilla birthday cake. If our dino is going to be eating this millions of times over, it should taste good!

The “birthday edition” dino was happy to have a costume change for the 10th anniversary.

How long does it take to beat the game?

Edward: We built it to max out at approximately 17 million years, the same amount of time that the T-rex was alive on Earth… but we feel like your spacebar may not be the same afterwards.