Attention, please: Supporting the ad industry to measure what matters

It’s important for advertisers to ensure their video ads don’t just reach their audience, but also capture their attention -- at scale. Today, I’m excited to announce new research and reporting features to help advertisers do just that.

Reach is a critical measure of scale for advertisers. To help you know how many people you're connecting with, we are introducing Unique Reach in AdWords. This update allows you to see the number of unique users and average impressions-per-user across devices, screens and platforms.

But mere exposure to advertising isn’t enough. In order to have real impact, ads must capture attention. And to maximize attention, you need to know that your audience has seen, heard and spent time with your ad.

Globally, YouTube viewability grew to an industry leading 93% in 2016, up from 91% in 2015.1 Across the web and apps, video viewability grew from 54% in 2015 to 66% in 2016.2 Ads on YouTube are also 95% audible.3 And while viewability and audibility are each important on their own, together they pack a much more powerful punch: In analyzing data from over a thousand YouTube ads, we’ve learned that users who both see and hear ads experience higher brand awareness, higher ad recall and higher consideration than those who only see or only hear ads.4 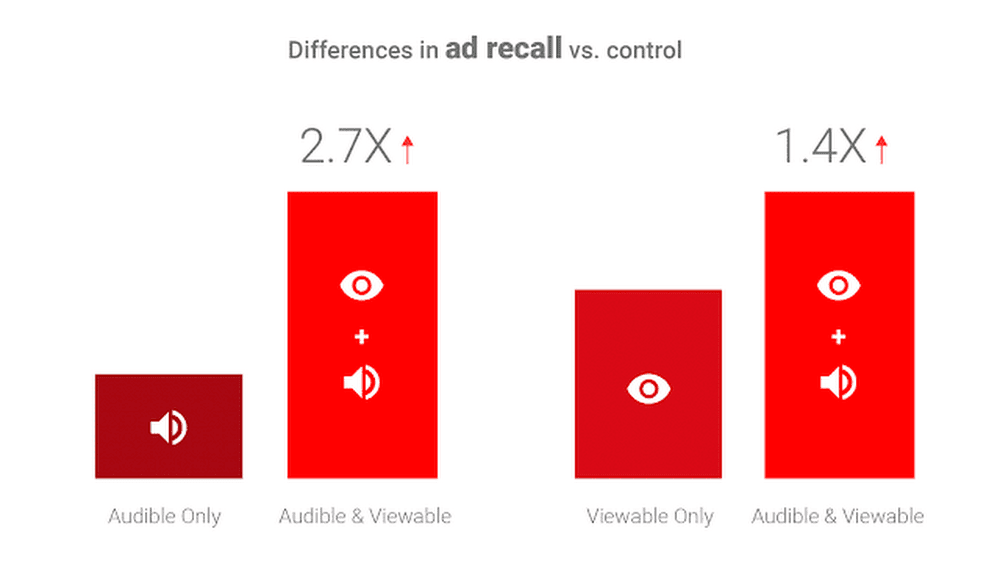 Finally, even with the assurance that your audience can see and hear your ad there still remains the lingering question of how much time they actually spent watching your content. To help provide advertisers with this critical layer of detail we’ll start reporting watch time for your in-stream and bumpers campaigns. Alongside viewability and audibility rates, watch time gives you another powerful signal for understanding how people view your ads.


Now, by looking at watch time across your YouTube campaigns, you can get closer to understanding which ads are holding the attention of your viewers, and are thus most likely to make an impact.

Driving business results in today’s media environment means prioritizing attention. On YouTube, advertisers are able to take that powerful combination of sight and sound, and scale it to over a billion users with the ability to better understand how many users you reached across screens and how much time they spent watching your ads. We’re excited to offer these metrics, which will be available shortly in AdWords. For more information, check out our Help Center articles on Unique Reach and watch time reporting.
1. Google and DoubleClick advertising platforms data, Q4 2015 over Q4 2014
2. Google and DoubleClick advertising platforms data, April 2016
3. Google Internal Data, Global, August 2016 (when volume is at least 10% for YouTube ads)
4. Google TrueView Brand Lift studies Aug-Sep 2016, Global
POSTED IN: