My mother was the first African American bank teller in my hometown in North Carolina in the 1960s. As you can imagine, this came with a lot of challenges. Team lunches and office holiday parties were sometimes hosted at racially segregated restaurants where they wouldn't serve my mother, and customers refused to work with her because of the color of her skin. Though these experiences were disconcerting for her, she stayed at the bank for more than 20 years where she progressed her career, helped transition the bank to a more inclusive workplace and paved the way for other women to take on similar roles.

Her story left an imprint on me. While she persevered through these challenges, she could have just as easily left. How would that have affected her career, the culture of the bank and its community and the experiences of people who worked there after her? How would her experience have been different if she wasn’t the only one? These questions fuel my work to address diversity, equity and inclusion in the workplace.

Measuring up the challenges

Lack of diversity in corporate America is a well-documented problem and improvements have been slow. I’ve seen this first hand throughout my career: from serving as a champion for the Department of Energy’s Minorities in Energy Initiative and leading diversity programs at Lockheed Martin to my current role where I lead our diversity, equity and inclusion efforts at Google.

I’ve learned over the years that you can’t fix what you don’t measure. Representation is a function of many factors such as hiring, development, progression, retention and culture. Without measuring these things, it is hard to know what changes need to be made. Which is why, at Google, we’ve been taking a second look at what and who we measure.

Specifically, we started paying closer attention to attrition rates so we know how many employees stay and leave our company each year. Why? Because we can’t improve representation without knowing which employees are leaving faster than others. More importantly, there are human beings behind the numbers we report each year, and how well we retain and develop talent has a real impact on people's careers and lives. That’s why we care about getting this right, and getting better.

Last year, Google published its first attrition index, and the results were mixed. Attrition rates indicate how many employees leave a company annually. Globally, women were leaving Google at lower rates than the average, and in the U.S., where we are able to report across race, Black and Latinx Googlers were leaving at faster rates than the average. Looking at these numbers, I always think about my mother’s experience at the bank. What would they have lost if they had failed to keep her there? Would they have been able to fix the roadblocks that ended her career? Thankfully, by measuring these numbers at Google, we can implement initiatives across Google to find solutions. Here’s a look at the improvements and progress we have made over the past year, and the work we have ahead.

Finding the gaps and mending them

To improve attrition, it’s our job to make sure underrepresented employees find satisfaction in their role, feel included at work and have opportunities to develop and grow.

It can be difficult to know where to go for career support, especially when you’re talking about a company as big as Google. This can be even more challenging for underrepresented groups who might not have representation in leadership, sponsorship or an existing network to rely on. To combat this, we created a new team of Retention Case Managers that I help lead. Retention Case Managers help connect employees with the right resources, whether it’s training for a new role or providing a safe space to share concerns and find community. We’ve already seen the positive impact this has on attrition, and look forward to expanding this program more broadly across the company.

We’re also always looking for ways to build and support community across the company. For example, my team created a State of Black Women event at Google where we brought together more than 500 black female employees from across the globe to meet with Google’s CEO, VP of Employee Engagement and myself. This not only created a space for the community to come together, but also allowed us as leaders to get closer to the challenges that our employees face.

We've learned that fostering community from the very beginning is important. Over the past year, we worked with internal Employee Resource Groups to make sure Black and Latinx Googlers have access to a community and a mentor to help navigate the beginning of their careers at Google. To date, nearly 200 Black and Latinx new employees have been paired with mentors across three countries. In 2019, we will be expanding this partnership to more Employee Resource Groups that support women and employees with disabilities.

Improvements in attrition year over year

A year after implementing these changes, 2018 attrition rates have improved for the majority of demographic groups across the company. Specially, Black and Latinx Googlers in the U.S. saw some of the largest year over year improvements in attrition.

While there are positive trends, there is still work to be done. Specifically, attrition for Native Americans worsened. And while rates improved for Black and Latinx Googlers, they are still not on par with the average. These are all areas we plan to focus on over the coming year. 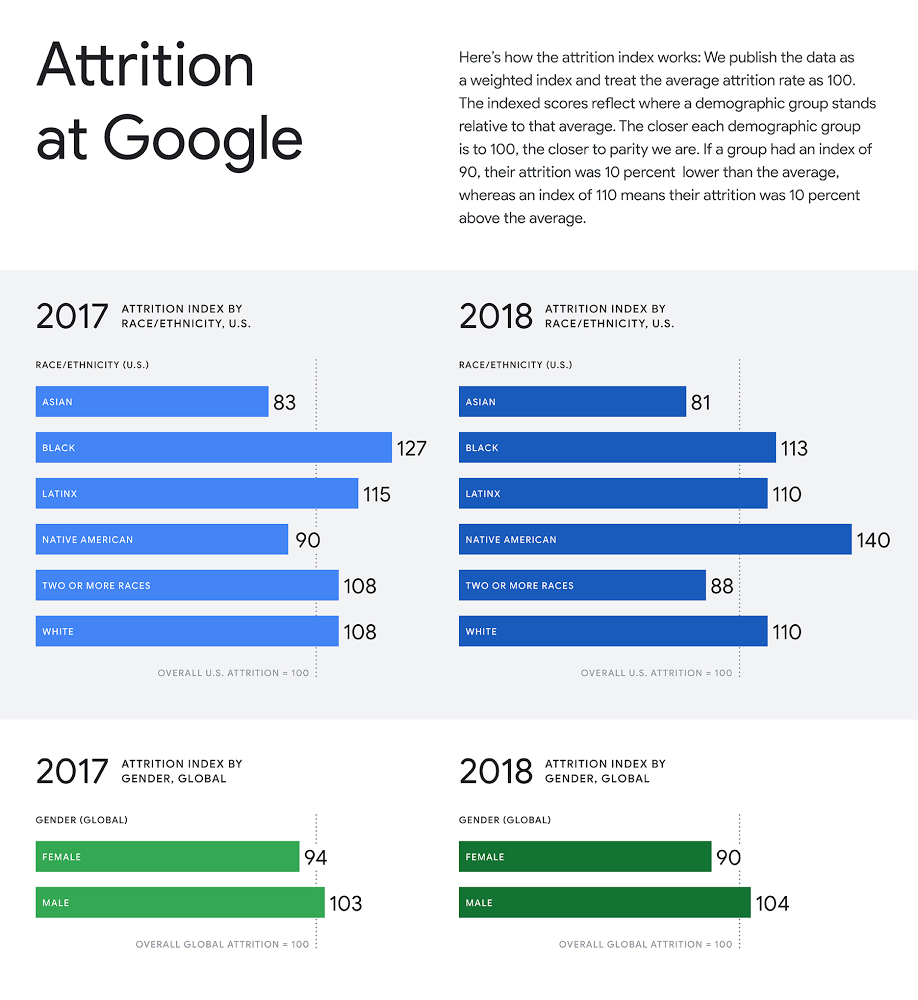 Diversity in the workplace is a hard problem to solve. By identifying challenges that we face across hiring, development, progression and attrition, we can understand where we should focus our efforts and affect real change to build a diverse and inclusive workplace for everyone.