When the COVID-19 pandemic hit, Google.org committed $50 million in grants focused on the areas where our resources and people can have the most impact: health and science, economic relief and recovery, and distance learning. Today we’re committing another $50 million, bringing our total contribution up to $100 million. Additionally, Google.org Fellows will give a total of 50,000 hours to COVID-19-specific projects. Read on about where our initial commitment has gone so far and how we’re thinking about allocating the next $50 million. 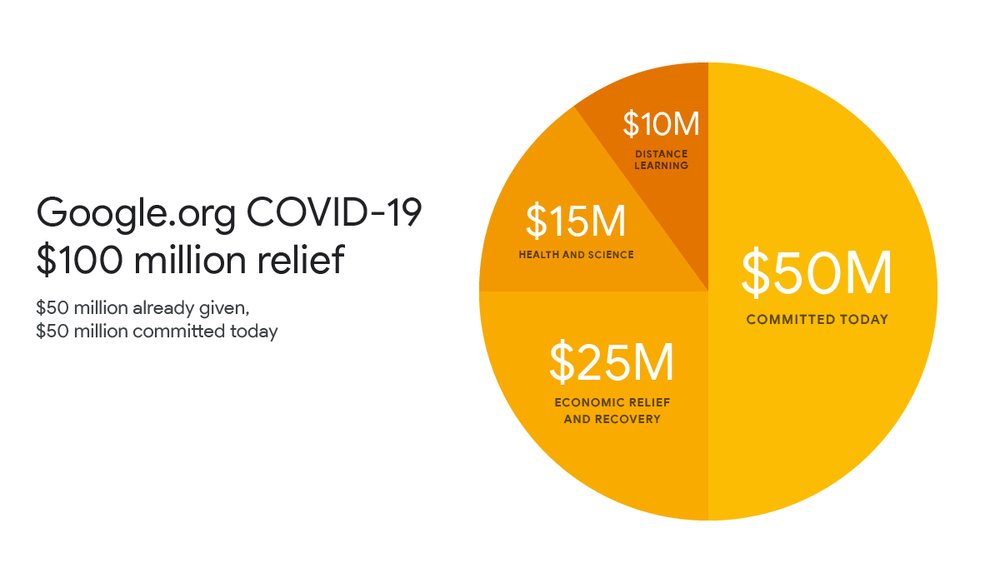 With over 3 million COVID-19 cases and 250,000 deaths worldwide, one of our top priorities has been supporting frontline workers who are battling the virus, as well as data science and disease tracking. Moving forward, we’ll continue to provide funding, Google.org Fellows, and volunteers to projects that use data analytics and AI to improve understanding of COVID-19 and its impact.

We've committed up to $10.5 million through public-matching campaigns  (which combines Google.org funding and Googler donation) to organizations including the World Health Organization to support preparedness, containment, response and recovery for those affected and for frontline workers around the world

AI and data to understand the impact of the virus

Data on the spread of COVID-19 is critical to understanding how it impacts public health and the economy. With Google.org Fellowships and grants to Boston Children's Hospital's HealthMap consortium and Médecins Sans Frontières in France, we're supporting the application of AI to develop new tools and models that monitor the spread of COVID-19 and provide real-time information to policy makers and healthcare systems.

Millions have been laid off worldwide as businesses close their doors, and, according to the OECD, these closures are likely to hit small and medium-sized businesses (SMBs) hardest. We've been providing grants to nonprofits supporting SMBs, local communities and hard-hit individuals and will continue to prioritize our efforts in these three ways.

SMBs in underrepresented communities and led by women

We've given more than $15 million in cash grants to nonprofits benefiting underrepresented business-owners. Today we’re giving a $5 million grant to Common Future to provide capital and technical assistance to 2,000 women and minority small business entrepreneurs in the U.S. We’re also making a $5 million grant to Youth Business International to launch a Rapid Response and Recovery Program that will provide critical support services including crisis helplines to more than 200,000 underserved SMBs in 32 countries across Europe, the Middle East, Africa and Asia Pacific.

We’re committing more than $10 million in immediate crisis relief grants to nonprofits in communities where we have offices around the globe. Local organizations know how to best address food security, care for vulnerable homeless populations, support victims of domestic violence or increase access to mental health care within their communities. We’ve made over $1 million in grants so far to organizations including the Silicon Valley Strong Fund, Kirkland Small Businesses Relief Fund, and Cambridge Mayoral Disaster Relief Fund in the U.S.. Across EMEA, we’re providing more than $4 million in grants to local organizations such as Feeding Britain and FareShare in the UK, A Lust for Life in Ireland, CEAR and Red Acoge in Spain, and the Egyptian Food Bank in Egypt.

Nearly 70 percent of U.S. self-employed workers have seen a decline in their earnings as a result of the COVID-19 outbreak. Research shows that giving cash directly is one of the most effective ways to aid people in times of crisis. A month ago we kicked off an effort to support GiveDirectly’s cash assistance campaign in the Bay Area. Since then, we’ve expanded efforts to support GiveDirectly in 12 other locations across the U.S. which has resulted in  donations of more than $8 million (this includes Google.org seed funding as well as Googler and public donations). We've also given $1 million to the Family Independence Initiative and provided grants to support nonprofits providing cash assistance to support vulnerable families in India through GiveIndia, part of $10 million we’ll be giving to direct cash efforts.

At the peak of school closures due to COVID-19, more than 1.5 billion students around the world could no longer physically attend school. Our $10 million distance learning fund helped schools, teachers and parents continue teaching through this disruption. As part of that fund, we made an initial grant of $1 million to Khan Academy, who will reach over 18 million affected learners every month.

We also made a $2.7 million grant to INCO so that nonprofits in Europe and Asia can digitize  learning materials and adapt to the new distance learning environment. On Monday, we announced the final component of the $10 million distance learning fund: a $2 million grant to DonorsChoose for their Keep Kids Learning effort. It helps teachers from high-poverty U.S. public schools purchase materials for remote teaching and student care packages containing food, books and school supplies.

Making it easier for Googlers to give back

There are thousands of Googlers eager to give money, or their own skills to organizations they’re passionate about. At the start of COVID-19, we launched an internal site to help Googlers find COVID-specific giving and volunteering opportunities in their communities. We’re matching skilled volunteers to select nonprofits and civic organizations including 31 Google.org Fellows who are providing three to six months of full time pro bono support to four COVID-19 specific Fellowship projects. We also increased Google’s annual gift match from $7,500 to $10,000.

This is one of many commitments at Google to help during this crisis, keep people safe and ensure they have access to the information they need. We’ll be sharing more as we build on these commitments globally, and continue to deploy resources to help the most affected and underserved communities recover and thrive.