Earlier this year, in close collaboration with local news publishers, we created Realtime Content Insights (RCI) to help newsrooms around the world make quick, data-driven content and distribution decisions. With this free tool, journalists can identify which articles are the most popular among their readers, as well as what broader topics are trending online in their regions.

Since its launch, RCI has brought the benefits of real-time analytics to newsrooms of all sizes from over 140 countries. During this time, we’ve learned from our conversations with publishers that our tool has helped editorial teams make content decisions during trending events and cultural moments, like elections.

Given how quickly political landscapes evolve, many publishers are using RCI to keep pace with readers’ interests and popular topics. Access to real-time analytics has helped publishers decide which stories to cover and how to get articles in front of the right readers, plus measure audience engagement and identify coverage gaps.

For example, Dainik Jagran, the most-read newspaper in India, used RCI to monitor Google Trends and Twitter conversations during the 2019 general elections. The tool helped their newsroom understand voter questions about the political race, prioritize covering and promoting the news stories that mattered most to their audience and build loyalty with readers over time. Those strategies resulted in a 450 percent boost in traffic, 180 percent increase in the time readers spent on their site and 300 percent growth in ad revenue on election day.

Rappler, a social news organization in the Philippines, also invested in making data central to everyday decision-making during their general election earlier this year. This included equipping employees with the resources and ability to understand and use data. After the election, Rappler used RCI to sustain audience growth and build loyalty. They set up RCI's "newsroom" view, alongside other data dashboards, throughout their offices, so editors can monitor the performance of sections in real-time. This approach resulted in an 8 percent increase in the number of articles read per visit and a 16 percent increase in average monthly readers year-over-year.

Over the last few months, we’ve heard similar success stories and received feedback from publishers on how to improve the tool. That’s why we’re introducing a new Trending Topics section within RCI that provides publishers with more real-time data from Google Trends. This information will help newsrooms better understand what readers care about and help inform content creation as news unfolds. 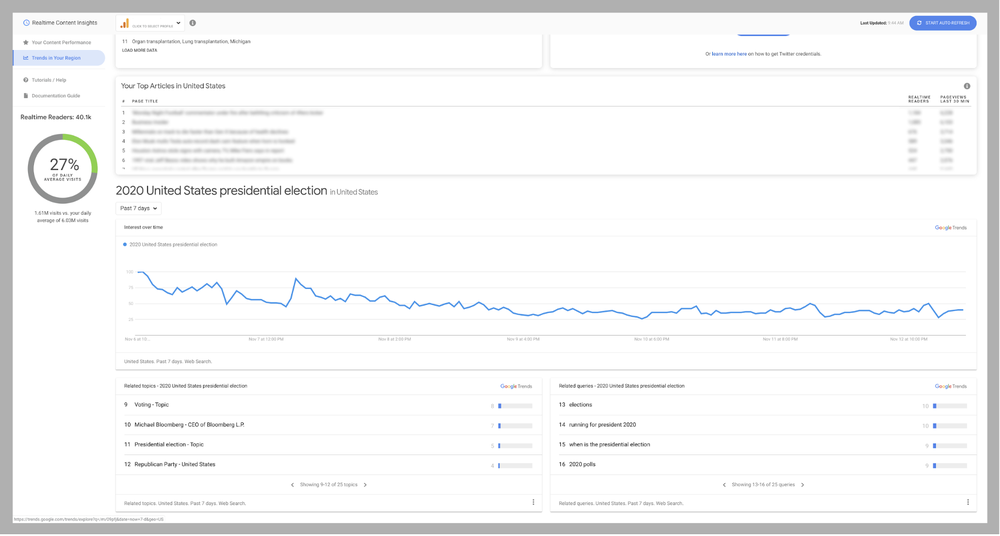 Here’s how it works: In the Trending Topics section, journalists can select a newsworthy event, such as the Summer Olympics, Brexit or the U.S. presidential election. RCI will then surface related topics and queries that are trending across the web, as well as show how reader interest has changed over time through charts. For example, a publisher may notice readers who are interested in the presidential election are also interested in a specific issue raised during a recent debate, such as income inequality. This could inspire future articles on the topic to meet readers’ needs.

The module will continue to introduce new topics relevant to global publishers over time. Check out our user guide for more information on Trending Topics, plus new enhancements we’re introducing to make RCI even easier to use.