Our focus on pay equity

Pay equity is a huge issue, not just for Silicon Valley companies, but across every industry in every country.

It’s very important to us that men and women who join Google in the same role are compensated on a level playing field, when they start and throughout their careers here.

That’s why, in the hopes of encouraging a broader conversation around the pay gap - and how companies can fight it - we shared our top-level analysis publicly in 2016. Google conducts rigorous, annual analyses so that our pay practices remain aligned with our commitment to equal pay practices.

So we were quite surprised when a representative of the Office of Federal Contract Compliance Programs at the U.S. Department of Labor (OFCCP) accused us of not compensating women fairly.  We were taken aback by this assertion, which came without any supporting data or methodology.  The OFCCP representative claimed to have reached this conclusion even as the OFCCP is seeking thousands of employee records, including contact details of our employees, in addition to the hundreds of thousands of documents we’ve already produced in response to 18 different document requests.

The fact is that our annual analysis is extremely scientific and robust. It relies on the same confidence interval that is used in medical testing (>95%).  And we have made the methodology available to other businesses who want to test their own compensation practices for equal pay.

So how does it work?

In short, each year, we suggest an amount for every employee’s new compensation (consisting of base salary, bonus and equity) based on role, job level, job location as well as current and recent performance ratings.  This suggested amount is “blind” to gender; the analysts who calculate the suggested amounts do not have access to employees’ gender data. An employee’s manager has limited discretion to adjust the suggested amount, providing they cite a legitimate adjustment rationale.

Our pay equity model then looks at employees in the same job categories, and analyzes their compensation to confirm that the adjusted amount shows no statistically significant differences between men’s and women’s compensation. 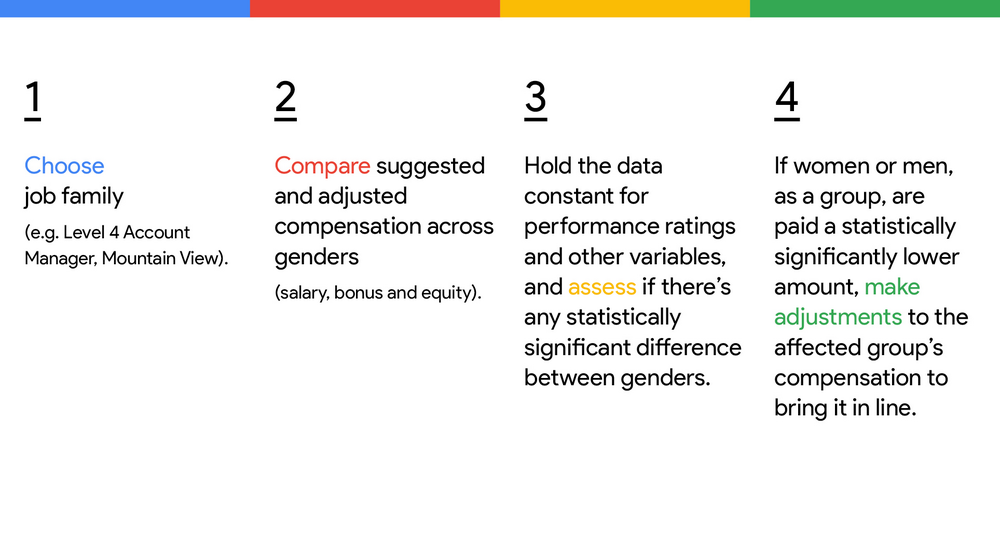 In late 2016, we performed our most recent analysis across 52 different, major job categories, and found no gender pay gap. Nevertheless, if individual employees are concerned, or think there are unique factors at play, or want a more individualized assessment, we dive deeper and make any appropriate corrections.

Our analysis gives us confidence that there is no gender pay gap at Google.  In fact, we recently expanded the analysis to cover race in the US.

We hope to work with the OFCCP to resolve this issue, and to help in its mission to improve equal pay across federal contractors.  And we look forward to demonstrating the robustness of Google’s approach to equal pay.