Vint Cerf on accessibility, the cello and noisy hearing aids

The Internet is undoubtedly a transformative technology, changing how people all over the world live and work. One of the key figures responsible for designing the architecture of the Internet is Dr. Vint Cerf, who along with Robert E. Kahn is known as one of the “fathers of the Internet.” Dr Cerf also been Google’s chief internet evangelist for last 12 years. This Disability Awareness Month, we sat down with him to learn more about the impact of technology on the more than 1 billion people with disabilities and why building accessible products matters to him on a personal level.

Many people might not know this, but you have a hearing impairment.

Vint: I was born six weeks prematurely in 1943. In those days, they put babies in oxygen tents to help them breathe with immature lungs. It’s thought that this treatment led to a progressing nerve loss which continues to this day—at about 1 dB loss per year. I’ve been wearing hearing aids for over 60 years.

Most kids hate to be different and just want to fit in. Wearing hearing aids must have been hard. How did you deal with that?

I began wearing dual hearing aids at age 13, in junior high. It was pretty noticeable. On the other hand, I was already a self-proclaimed geek and went on to high school wearing sports coats, slacks and ties. If I was going to look different, I decided to do it with style!

What advice would you give your younger self about how to get comfortable with your hearing impairment?

There was no hiding those bulky, behind-the-ear hearing aids. Now I’m very open about it, even though the hearing aids are less noticeable. My advice to my younger self would have been to try to get more matter-of-fact about my hearing loss. One awkward problem—especially with behind-the-ear aids—is that they squealed when you were making out. Wrecks the mood. On the other hand, taking them off made me incommunicado. Tough choices! 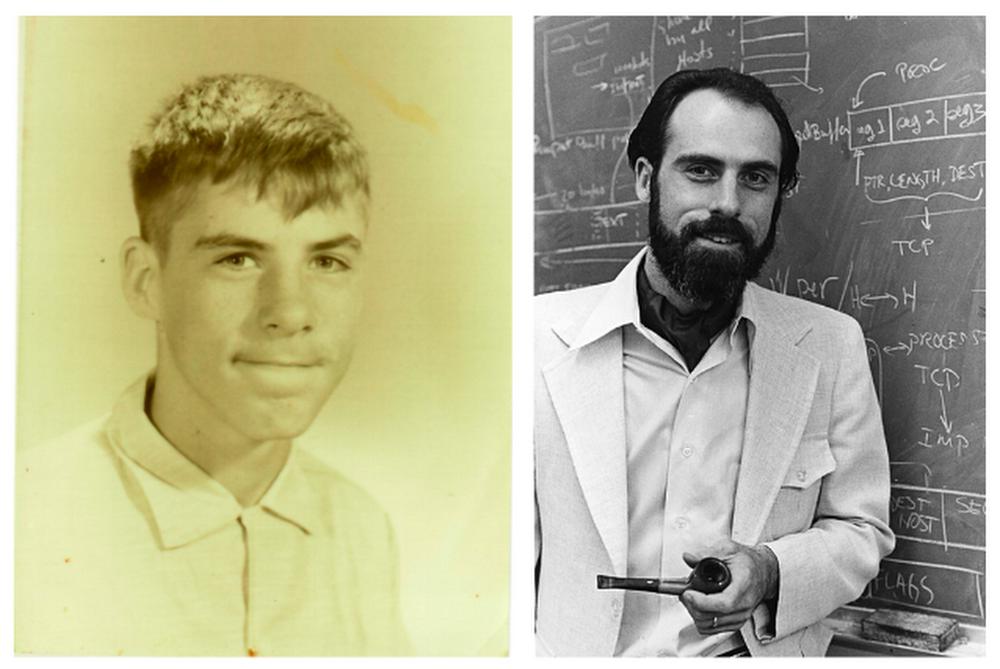 Did you ever feel your hearing impairment held you back?

I don’t think I ever felt “held back,” although fast-talking comedians are often frustrating because I miss the too-fast punch lines. But I have learned to adapt my practices to diminish the effects of deafness. For example, I do Q&A on stage by roaming around with a microphone so I can get close enough to lip read if I have to.

How would you say your disability has shaped your own interaction with technology?

While at UCLA for my Ph.D., I got involved in the ARPANET project. Around 1971, Ray Tomlinson developed the idea of networked electronic mail, which was hugely attractive to me because it replaced uncertain voice calls with the clarity of text. The development of the Internet was undertaken in the context of heavy use of email.

The rise of video conferencing has actually been a huge challenge for me as it reintroduces some of the uncertainty of voice calling and I look forward to real-time, automatic captioning to overcome the limitations that medium poses for me. 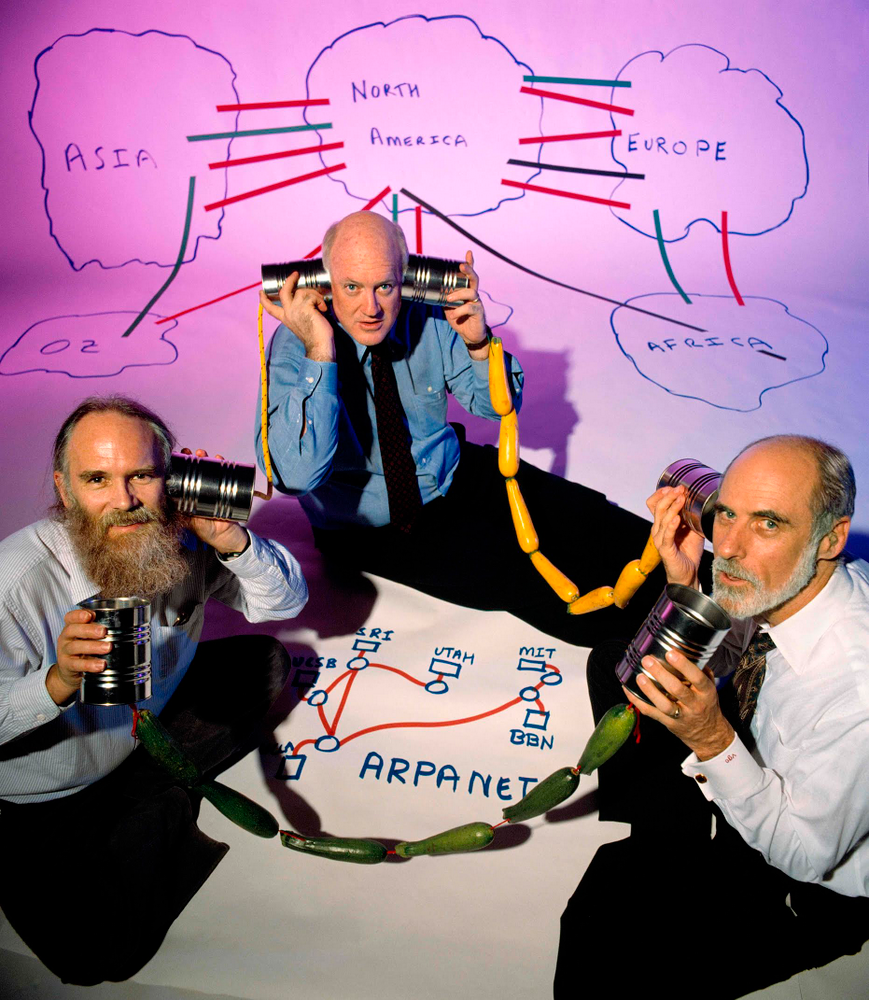 Vint Cerf (right) with Jon Postel and Steve Crocker in 1994. The three were part of the team working on the ARPAnet, which eventually became today's Internet.

Was accessibility something you were thinking of when you and Bob Kahn were developing the protocols for the creation of the Internet?

Not at the time. Today, however, given the huge advantages of computer applications, it’s a high priority to ensure that disabilities do not prevent people from gaining the full benefit of online and offline digital environments.

In an interview with “The Washington Post” you said, “I traded in my cello for a keyboard.” What would life would have been like if you hadn’t made that switch?

I wish I had not treated this as a binary choice. It is entirely possible to have both but I didn’t fully appreciate that at the time. I did get to attend a masters class led by Pablo Casals at Berkeley in 1958. It was truly inspiring but computers grabbed my attention even more dramatically at that time. Perhaps it is time to go back to see whether I can regain that skill. The cello is a magnificent instrument.

You’re married to someone who has a hearing impairment—but she got cochlear implants that really changed her life. You have quite a funny story about that.

Sigrid was born with normal hearing but lost it at age three after a bout with spinal meningitis. She was profoundly deaf, and functioned in a hearing world through lip-reading.

At age 53, she received her first cochlear implant. It functioned spectacularly well. After that, she was eager to make and receive phone calls—even from solicitors. She got one call from an AT&T salesperson in India and asked "oh, which part of India are you from?" The conversation went on for quite a while. Finally the poor salesperson asked, "So you're going to switch to AT&T?" and Sigrid said, "Oh no, my husband is SVP at MCI but thanks for calling!" 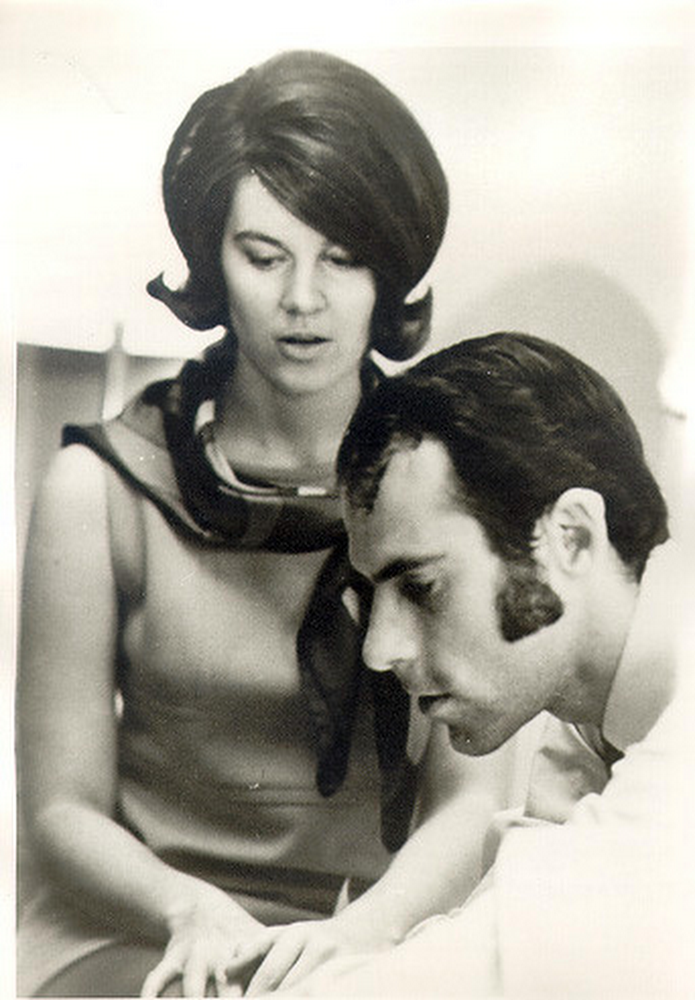 Vint and his wife Sigrid circa 1969

What lessons have you learned from others with disabilities?

Jack Chen is a lawyer at Google who is blind and does stuff that I think is nuts (like bicycle riding) but he’s wonderfully open to discussing blindness and his coping mechanisms. It is from my interactions with Jack that I refined and reinforced my own comfort with talking about the challenges of deafness. I remember asking him whether he cooked. He said, “Yes!” Then I asked him, how can you tell if the food is cooked? He said, “I touch it with my fingers.” That’s when I said I wasn’t going to eat steaks that he pan fried. We both had a good laugh. It’s incredibly important to be able to laugh about some of the situations disabilities put you in.

What message do you have for people creating technology today and how they should think about accessibility?

It must be thought through during the design phase of any product. Accessibility and ease of use go hand in hand. Many people experience temporary disability (broken arm, leg, finger, blocked ears…) and appreciate the value of accessibility features from that experience. There is no excuse for making products that are not accessible.