A family holiday, no matter what

March 23 is an important holiday to the Zaraysky family: It’s the day Susanna, her sister and her parents left the former Soviet Union for the United States. This past March marked the 40th anniversary of their departure from modern-day Russia, as well as her parents’ 50th wedding anniversary, and the family planned to celebrate.

“Before the lock down, my mom had me call different restaurants to figure out their menus and see if they had a room that could house 35 people,” says Susanna, who today is a content strategist for Google’s Material Design division. “But then, because of COVID-19, the restrictions kept coming.” Soon, Susanna and her family realized a party would be impossible.

Finding a workaround wouldn’t be easy. Both of Susanna’s parents are hard of hearing, and primarily speak Russian. Susanna’s father is also in a nursing home, which wasn’t allowing visitors in. The family would stand outside, separated by a glass door, which there was little to no chance her father would be able to hear them through. “We knew that we weren’t even going to be able to bring food in and sit with him and eat and visit.”

A tool that Susanna had demoed at Google I/O last year proved to be the solution. “I had volunteered to work in the accessibility booth, and I did demos of Live Transcribe,” she remembers. Live Transcribe is a free, real-time speech-to-text transcription app for Android that works in more than 80 languages. “If someone had an accent, I would ask what language they spoke and asked them to speak in their native tongue and showed them the transcriptions in their language. It was amazing to see; people’s eyes would open up and their jaws would drop! They would say ‘oh I can use this with my parents and friends.’” After the launch, Susanna began using Live Transcribe with her father. During doctor’s visits,  Live Transcribe allowed her father to read what the doctor was saying in real time, while family members helped clarify important information and ensure caption accuracy.  Her parents had even visited Google’s campus to meet Dimitri Kanevsky, one of the creators of Live Transcribe, who also left the former Soviet Union, and communicated with him in Russian using the app.

“My parents and Dimitri communicated in Russian using Live Transcribe,” Susanna remembers. “People with disabilities in the former Soviet Union were not given many opportunities to excel. So to see someone like Dimitri, who is deaf, from your origin country create a life-changing, revolutionary technology...I think my parents are really proud that I work for a company that makes technology to help people with disabilities, especially because of my own background."

Susanna was born with strabismus (crossed eyes) and placed in a Soviet preschool for the developmentally disabled, even though she had no developmental issues. “I know about limitations for the visually impaired first-hand.”

Susanna sees Live Transcribe as an assistive technology that helps everyone, regardless of whether or not they have an impairment. “The curb cut on the sidewalk is just as important to the grandmother in the wheelchair, as it is to the grandson wheeling it,” she explains. “That’s what makes it easier to maneuver the wheelchair across the street.” As more and more people use Live Transcribe, it builds social awareness about how we can, and why we should, integrate assistive tools into modern life.

This much was obvious for her family this past March. “One of the nurses wheeled my dad in his wheelchair to the glass doors of the nursing home,” she says. Her father wasn’t expecting to see her, or his grandchildren, standing outside. Holding her tablet up to the door, Susanna, her sister and her niece and nephew spoke and Live Transcribe typed out their words in real time in Russian and English on the screen, so her father could read them. They heard his spoken responses through the glass door and most importantly were touched by his smile when he read his granddaughter saying “We miss you and we love you” on the tablet screen. “We could not have ‘spoken’ to my dad in real time without the app,” Susanna says. Her family left food for him, chatted for a bit with the help of the app and took a few photos. While it wasn’t the big party at a nice restaurant they’d originally planned, that moment was a way to recognize a meaningful time for their family.

Because her mother is high risk, she couldn’t be at the nursing home for the celebration. And now, due to a COVID-19 outbreak at the facility, quarantine procedures are even more strict and the family can no longer visit in person at all. It was a challenge figuring out how to have a virtual call with Russian captions that would have the same simple “glass door” experience, but eventually they found a way using a smartphone and video chat. “We held the tablet by our chest, so he could see us and the text on the screen at the same time,” Susanna says. The phone propped up on the table essentially became their new “glass door.” 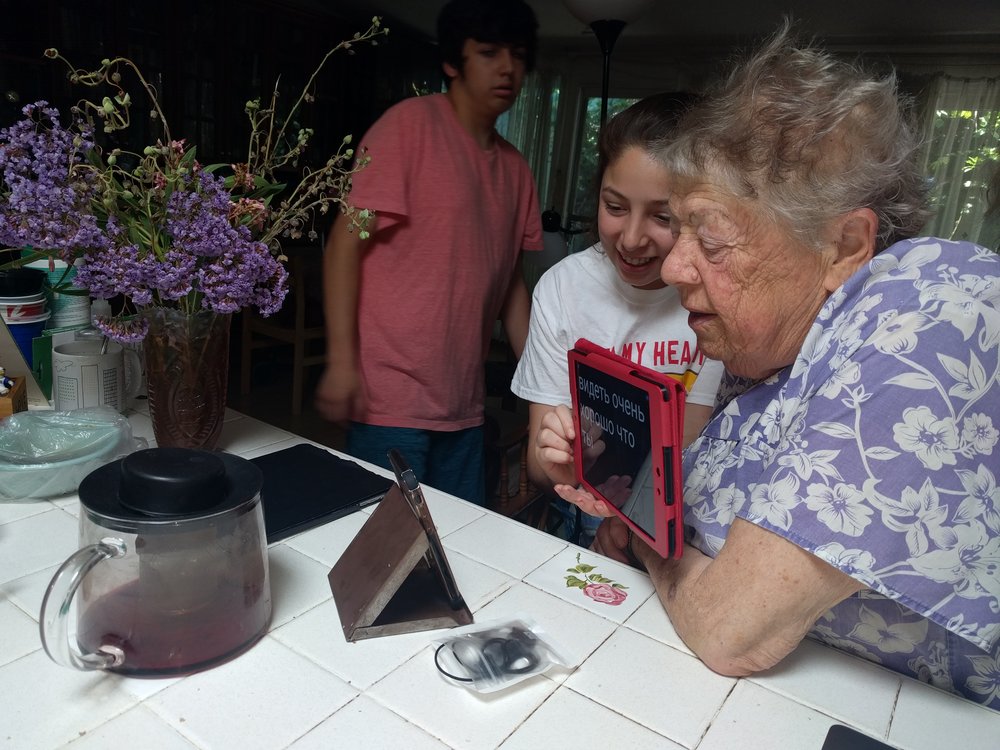 Susanna's niece and mother speak to her father using Live Transcribe in Russian on their tablet while her father watches them via video call on the phone propped up on a homemade phone stand.

Susanna says there’s an “irony” to commemorating her family’s freedom during a quarantine that’s separated them. When they left the Soviet Union, she remembers waving goodbye to her cousin and uncle through the glass doors of the Leningrad Airport. Forty years later, here they were, using assistive technology to feel closer despite the glass between them. “The fact that we used this technology to celebrate our family’s departure from a country that didn’t allow people to communicate…” Susanna says. “For me, there’s a significance beyond communicating with my dad through a glass door.”