Ask a Techspert: What is quantum computing?

Editor’s Note: Do you ever feel like a fish out of water? Try being a tech novice and talking to an engineer at a place like Google. Ask a Techspert is a new series on the Keyword asking Googler experts to explain complicated technology for the rest of us. This isn’t meant to be comprehensive, but just enough to make you sound smart at a dinner party.

Quantum computing sounds like something out of a sci-fi movie. But it’s real, and scientists and engineers are working to make it a practical reality. Google engineers are creating chips the size of a quarter that could revolutionize the computers of tomorrow. But what is quantum computing, exactly?

The Keyword’s very first Techspert is Marissa Giustina, a research scientist and quantum electronics engineer in our Santa Barbara office. We asked her to explain how this emerging technology actually works.

What do we need to know about conventional computers when we think about quantum computers?

At a first glance, “information” seems like an abstract concept. Sure, information can be stored by writing and drawing—humans figured that out a long time ago. Still, there doesn’t seem to be anything physically tangible about the process of thinking.

Enter the personal computer. It’s a machine—a purely physical object—that manipulates information. So how does it do that, if it’s a physical machine and information is abstract? Well, information is actually physical. Computers store and process rich, detailed information by breaking it down. At a low level, a computer represents information as a series of “bits.” Each bit can take a value of either [0] or [1], and physically, these bits are tiny electrical switches that can be either open [0] or closed [1]. Emails, photos and videos on YouTube are all represented by long sequences of bits—long rows of tiny electrical switches inside a computer.

The computer “computes” by manipulating those bits, like changing between [0] and [1] (opening or closing a switch), or checking whether two bits have equal or opposite values and setting another bit accordingly. These bit-level manipulations are the basis of even the fanciest computer programs.

Ones and zeros, like "The Matrix." Got it. So then what is a quantum computer?

A quantum computer is a machine that stores and manipulates information as quantum bits, or “qubits,” instead of the “classical” bits we were talking about before. Quantum bits are good at storing and manipulating a different kind of information than classical bits, since they are governed by rules of quantum mechanics—the same rules that govern the behavior of atoms and molecules.

What’s the difference between a bit and a qubit?

At first, it sounds like a qubit can hold way more information than a regular bit. But there’s a catch: the “rules” of quantum mechanics restrict what kinds of information we can get out of a qubit. If we want to know the configuration of a classical bit, we just look at it, and we see that the switch is either open [0] or closed [1]. If we want to know the configuration of a qubit, we measure it, but the only possible measurement outcomes are [0] (north pole) or [1] (south pole). A qubit that was situated on the equator will measure as [0] 50 percent of the time and [1] the other 50 percent of the time. That means we have to repeat measurements many times in order to learn about a qubit’s actual configuration. 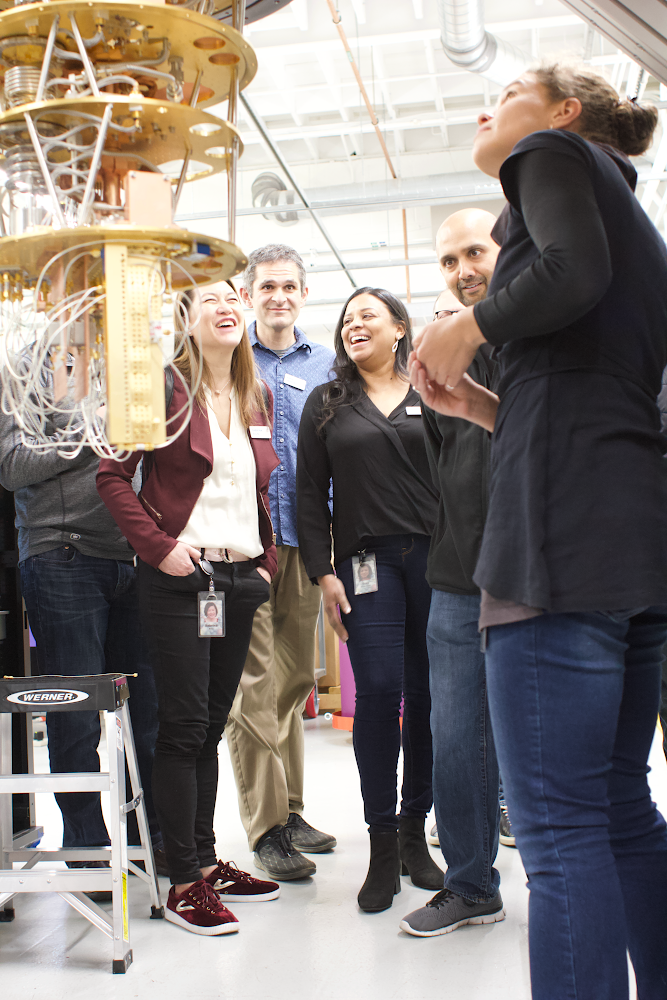 Researcher Marissa Giustina (right) in the Google AI Quantum hardware lab shares quantum computing hardware with Google executives. On the left, you can see the coldest part of a cryostat and some quantum hardware mounted to the bottom.

So if qubits are so tricky to measure, how can you build a quantum computer?

Well, you’re right—it’s complicated! My main focus at Google, together with my teammates, is to figure out how to build a quantum computer and how we can use it. Years of research have given us a pretty good idea of how to build and control a few quantum bits, but the process of scaling up to a full quantum processor is not just “copy-paste.” We’re also continuing to investigate possible uses of quantum computers, where there’s a lot that's unknown. It’s wrong to think of a quantum computer as a more powerful version of your regular computer. Instead, each is a machine that’s good at certain—and different—kinds of tasks. If you’re going to your local grocery store, you’d take a car or walk, but you wouldn’t take a plane or a spaceship.

In our hardware at Google, the qubits are resonant electrical circuits made of patterned aluminum on a silicon chip. In our qubits, electricity sloshes around the circuit at a lower or higher energy to encode the quantum version of [0] and [1]. We use aluminum because at very low temperatures aluminum becomes superconducting, which means it experiences no electrical loss. By “very low temperatures” I mean that we operate our quantum processors in a special refrigerator called a cryostat, which cools the chips to below 50 millikelvin—significantly colder than outer space!

When you see pictures of “a quantum computer,” usually you notice the cryostat—which is bigger than a person. But that’s just the shell, providing the proper environment for the processor to function. The quantum processor itself is a silicon chip installed in the cryostat, and is closer to the size of a coin. The qubits are small, roughly 0.1 mm across, but not that small—you can see them with the naked eye (though it’s easier with a magnifying glass or microscope).

Do you know what we would use a quantum computer for?

As I mentioned, a quantum computer is a novel kind of computing machine—not a speedier or beefier version of your laptop. However, quantum computers, with their fundamentally different way of encoding and manipulating information, promise to be good at some problems that would choke regular computers. One example is the simulation of chemical reactions.

Suppose a chemist wants to develop a material—for example a better fertilizer, an anti-corrosion coating, or an efficient solar cell. Even if the chemist knows the structure of a new molecule they’re developing, they won’t know how that molecule behaves in the real world until they make it and test it. This makes materials research laborious and expensive. It would be much more efficient if researchers could simulate the behavior of a new molecule before synthesizing it in the lab. However, every atom in a molecule is affected by every other atom, which means that each time you add an atom to a molecule, there are twice as many parameters to include in the simulation. As a result, chemistry simulation becomes impossible for a classical computer, even for relatively small molecules. The quantum computer, in contrast, is based in the same physics that governs the molecule’s behavior. I’m optimistic that quantum computers could change the way we do research on materials.

Wow, that’s exciting. Where can I learn more about this?

I’m so glad you asked! My teammates and I are working on a series of videos to explain the basics of our work in more detail—you can find them below.