Having worked in news publishing for more than two decades, I’ve seen firsthand the impact the internet has had on the way we create and consume news. As people spend more time online, journalists and newspaper publishers are increasingly turning to technology to find new ways to reach readers. From subscriptions to data analytics to new formats, the news industry is transforming itself.

While digital reader revenues are growing at a promising rate, there is no doubt that the publishers’ business model has been challenged over the past several decades. Some critics have argued that if Google and Facebook didn’t exist, much of the revenue from print newspapers would have stayed with news publishers – that these tech platforms directly disrupted the newspaper business model.

New research released today looks at the facts which disprove that theory. The analysis from economists at Accenture, commissioned by Google, looks at the revenues of newspapers in Western Europe over nearly two decades to reveal exactly what broke the old business model for newspapers. The data is clear: Almost half of the overall decline of newspaper revenue has come not from Search or social advertising, but from the loss of newspaper classifieds to specialist online players.

The countries included for analysis in this report are Austria, Belgium, Denmark, Finland, France, Germany, Greece, Ireland, Italy, Netherlands, Norway, Portugal, Spain, Sweden, Switzerland and the U.K., chosen based on the availability of robust data. Here’s what the report found:

Four out of five of us now access news online. As a result, many publishers are using the latest technologies, including artificial intelligence, to reach readers and grow subscriptions. While many readers are not in the habit of paying for access to news, between 2013 and 2018, digital circulation volumes increased by 307% to reach 31.5 million paying subscribers globally, more than offsetting the decline in paid print subscriptions. Since 2018, the pace of publishers launching digital subscription models has accelerated further, which is a promising sign.

However, the growth in online revenue has not been enough to offset the loss from newspaper print advertising. As people move online, regular display advertising in newspapers became less popular, with revenue in this segment decreasing from €13.8 billion to €8 billion between 2003 and 2019 in Western Europe.

What happened to newspaper revenues?

The majority of advertising in newspapers was made of classifieds like selling cars and homes, or listing jobs, and births and deaths notices. These advertisements, or “classifieds,” contributed €9.9 billion – almost a quarter – of newspaper revenues, and newspapers collected 93% of all classified advertising in 2003.

However, by 2019, only 32% of that revenue was going to newspapers, generating just €2.8 billion, with the drop accounting for 44% of newspapers’ total revenue decline over the period. 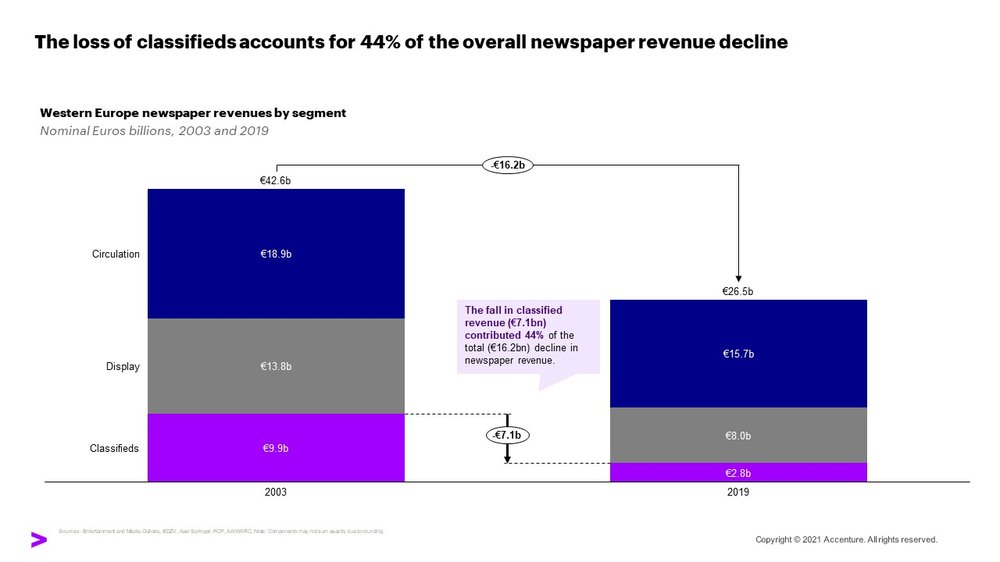 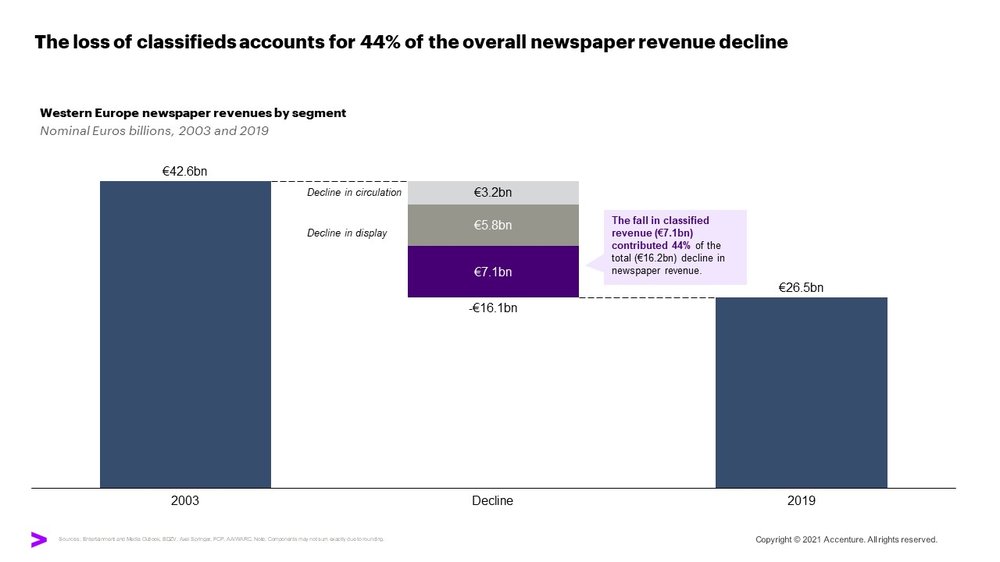 This shift was driven by the emergence of a large number of digital only sites like Scout24 and Rightmove for real estate; Totaljobs for Jobs and Mobile.de, Automobile.it, Bilbasen and Motors.co.uk for cars. Many of these were formerly owned by newspaper publishers or media groups. 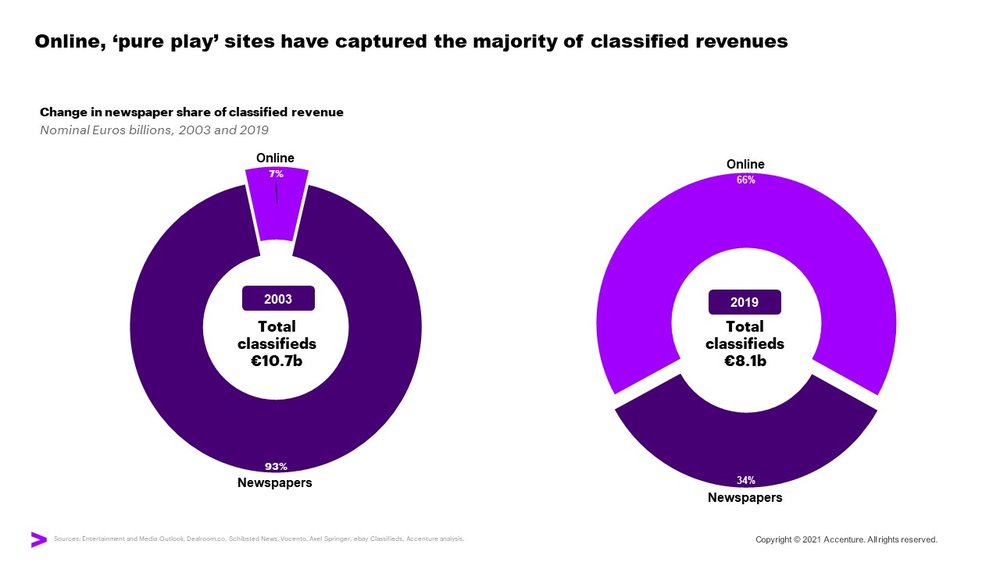 What about online advertising?

That’s not all that has changed, of course. Over the same period we’ve seen the transformative development of search and social media platforms. In turn, the value of online advertising has grown significantly from €2.2 billion in 2003 to €50.5 billion in 2019, along with growth in all advertising sectors.

But this did not come at the expense of newspaper revenues. In fact, the research shows that Internet advertising as a whole has grown predominantly from new opportunities. Online advertising represents an entirely new way for advertisers to connect with their customers. Among other things, it created a scalable and cost-effective opportunity for small and medium- sized businesses to reach consumers in a way they couldn’t afford to before, and of course for newspapers to place ads alongside their content online.

What does this mean for newspapers?

Today we spend more time than ever before consuming news, and there are many innovative new publishers that would have struggled to get a foothold in the days of the printing press. There are green shoots of growth amid traditional newspapers, too. GEDI in Italy implemented a data strategy to improve reader engagement, increase subscriptions and drive revenue from advertisers, and Dagens Nyheter in Sweden uses three different paywall strategies to convert readers to paid subscribers, reducing the number of people who cancelled their subscription from 15% to 8% in just two years.

Google is significantly contributing to that growth. Over the past 20 years, Google has collaborated closely with the news industry and is one of the world’s biggest financial supporters of journalism, providing billions of dollars to support the creation of quality journalism in the digital age.

Delve into the research and find out more on Accenture’s website.